„NUMBER ONE“ IN CONTACTLESS ULTRASOUND HANDLING

Contactless Handling of Wafers in the Solar Industry

Gentle and fast handling with ultrasound

Challenges in the processing and handling of silicon wafers

Photovoltaic systems or solar modules, which consist of the interconnection of individual solar cells, are known to play an important role in renewable energies. The potential through the energy output of the sun is enormous and through the further development of solar technology, the efficiency could already be significantly increased. The most important semiconductor material for the manufacture of solar cells is silicon.

Damage often occurs during the production and further processing of silicon wafers. In addition to downtimes and additional cleaning steps as well as readjustments, there are also increased material and process costs. The smoother the handling, the less likely the material is to crack or break.

Furthermore, both sides of the wafer are now frequently coated, as for example in heterojunction technology, in order to generate higher efficiencies. As a result, the handling processes are also becoming more and more demanding to avoid marks, scratches, or particles. Using ZS-Handling's patented ultrasonic bearing, substrates can float evenly on a film of air generated by vibrations and thus be held without contact during handling. Through a combination of negative pressure and ultrasound, attractive and repulsive forces act simultaneously on the workpiece, thus keeping it at a distance even during transport from above. 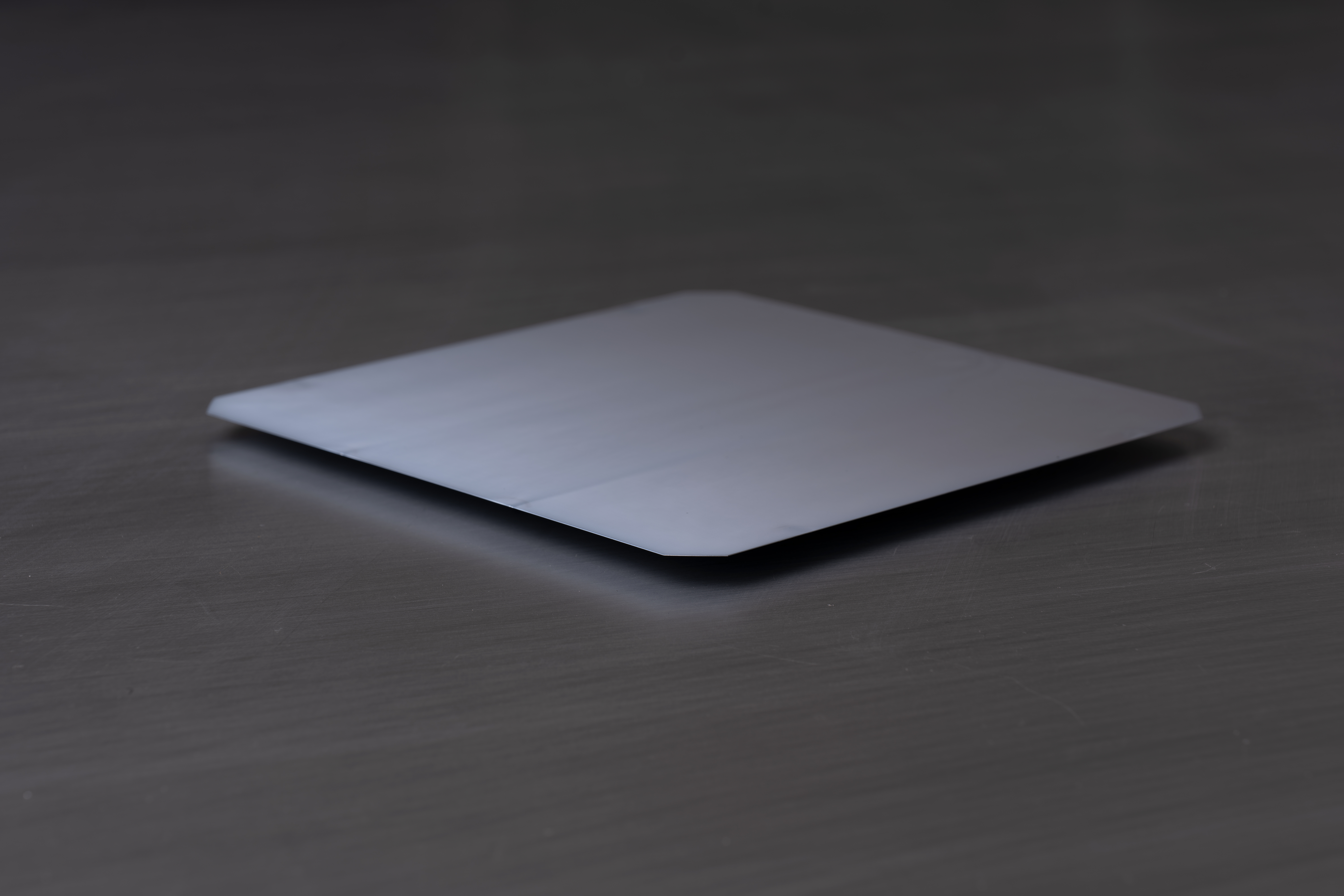 How does the ultrasonic technology work?

The ultrasonic movement of the so-called sonotrode creates a supporting gas film (air or process gas) between the sonotrode surface and the substrate. The substrate floats on the resulting gas film at distances of 10 - 150 μm, depending on the application. In this way any mechanical surface contact is avoided.

The physics of the ultrasonic bearing results from the flow dynamics. The gas pressure in the gap between the workpiece and the vibrating surface increases due to the cyclic compression and decompression of the thin gas film. It is therefore necessary to realize a uniform oscillation pattern in order to generate constant floating forces over the entire sonotrode. The vibrations are not transmitted into the substrates and do not lead to any impairment of the substrate material.

With the repulsive forces of the ultrasonic bearing, the substrate can be supported without any friction even at very high speeds. In combination with vacuum, attractive forces can be applied simultaneously, which allows handling from above. In addition, flexible materials can be "smoothed" without contact by this technique, i.e. they can be kept in a uniform, flat position.

The principle of operation of ZS-Handling handling systems is similar to that of a conventional air bearing, but no compressed air supply is required. This means, for example, that in a clean room environment the laminar air flow - unlike with Bernoulli grippers - is not disturbed by high flow velocities and no particles can penetrate through external air or via pipes. Also, the costs for the compressed air supply can be saved in production lines.

By avoiding surface contact and without dynamic turbulence in the ambient gas, no damage, micro-scratches, micro-cracks, or contamination can damage the substrate. Handling on machined or coated surfaces is possible without contact, allowing more degrees of freedom in process and machine design. During handling, a high level of flatness of the substrate is achieved as well.

The systems can be used in all atmospheric processes and in up to 20% partial vacuum processes. This requires fewer resources, such as energy or compressed air, than a standard air bearing. This has a positive effect on the energy and cost balance for the handling systems of ZS-Handling.

Exemplary requirements of a use case:

In a clean room environment of ISO 6, silicon solar wafers are to be separated from a stack without contact and handled from above before they can be inspected and sorted. They are then placed on matrix trays and coated in the subsequent process. The wafers have a size of 156x156 mm and a thickness of 120-180 µm. A cycle time of 1.8s (2,000 wafers per hour) is to be achieved for the gripping process, with a time for picking up and placing of 0.1s each. For transport via linear belts (from above and below), speeds of up to 7,200 wafers per hour are to be achieved. At the same time, the breakage rate should be minimal with the highest possible machine availability.

includes the Modular Waferhandling-System, which can be combined from different modules as required. First, the LeviSolar-Gripper is required, which is connected to an axis system provided by the customer. The gripper picks up the topmost solar wafer from the stack, which is repeatedly brought to the same height with the help of a servo motor. The combination of ultrasound and underpressure allows to pick up the wafer from the top without any contact. The wafer can be guided vertically and horizontally with high accelerations. To ensure that the wafer does not lose position in the process, the wafer gripper is equipped with four side stops made of PEEK, which are only lightly touched by the wafer from the side. 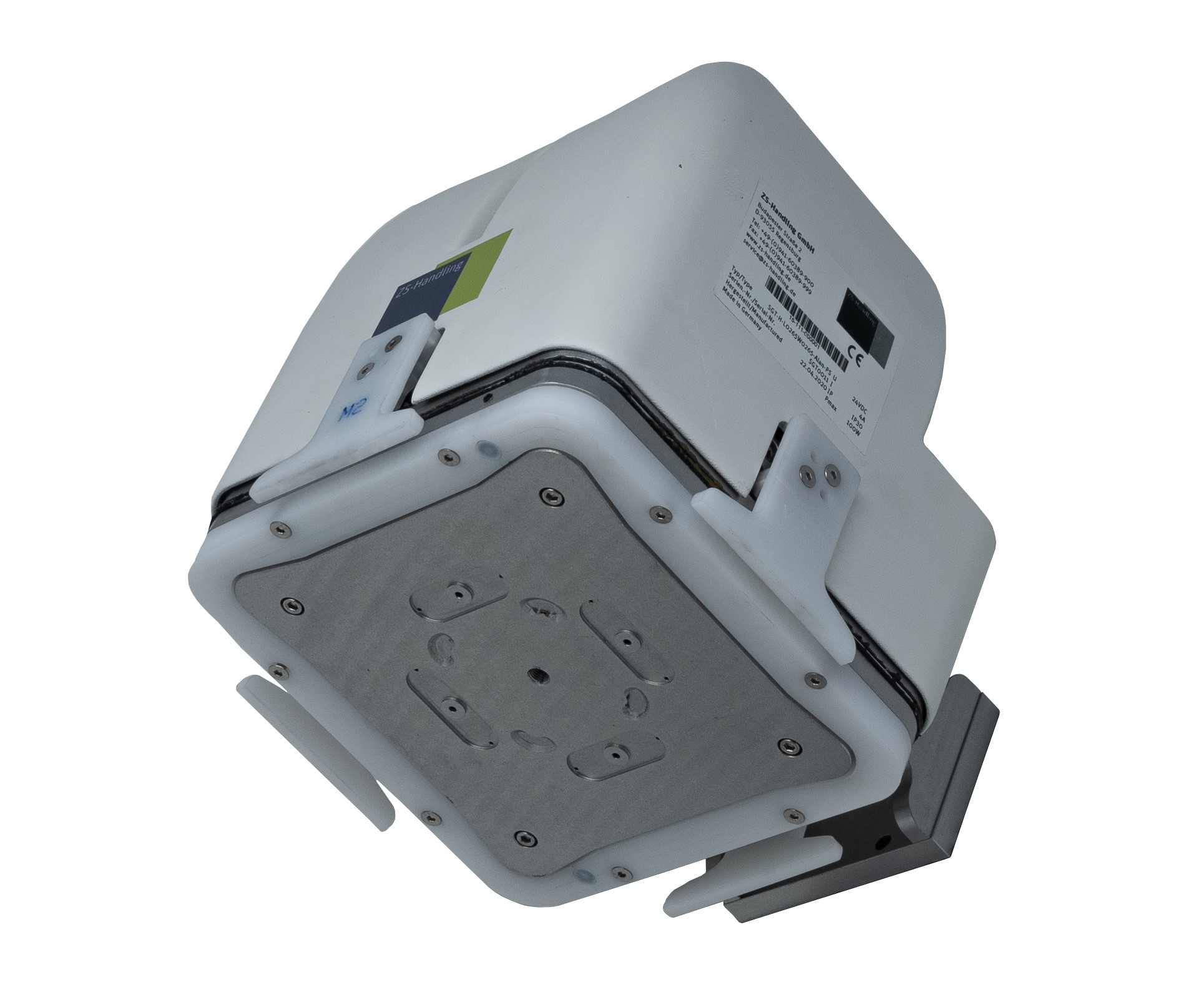 To ensure that the gripper does not pick up several wafers at the same time, the so-called "Airsword" is used. This pneumatic separator, which is mounted on four sides of the stack, fans out the topmost wafers of the stack with compressed air blowing in such a way that only the topmost one can be gripped at a time. An optical sensor checks the position of the uppermost wafer and thus the correct function of the Airsword. This optional module, which does not require ultrasound, was desired in this case due to its advantages despite compressed air. 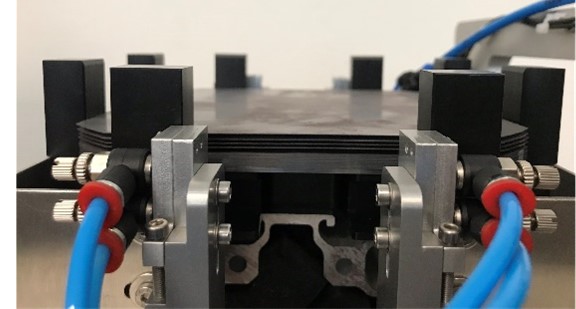 The wafer is then placed on a non-contact conveyor, the LinearLevi-Conveyor, where it is transported to the next process which is inspection. Despite fast speeds, only very low forces have to be applied due to the floating state of the wafer. Lateral belts ensure the feed and prevent the orientation of the wafers from changing. A slight inclination is sufficient to achieve sufficient frictional forces at the edges through gravity to accelerate and decelerate the wafer. The edge of the wafer is only loaded by a fraction of its own weight. 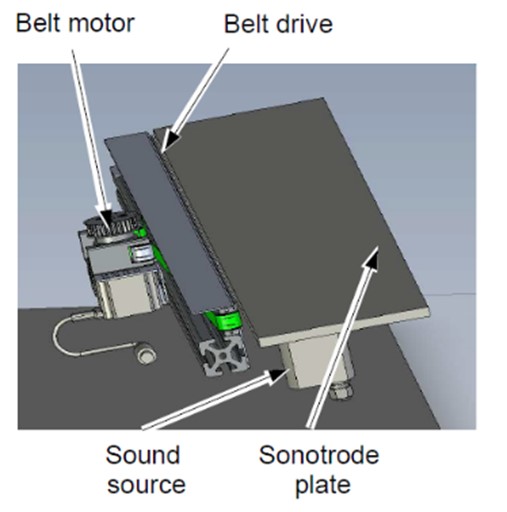 A LinearLevi-Inspection module is integrated into one section of the conveyor belt. In this case, the sonotrode is made of glass so that the quality of the wafer can be checked by optical measurement technology from both sides during the non-contact transport. The wafer surface can also be inspected through the glass without any problems. At the end of the module there is a gap of approx. 25 mm for a further sensor, over which the wafer can slide without any problems. 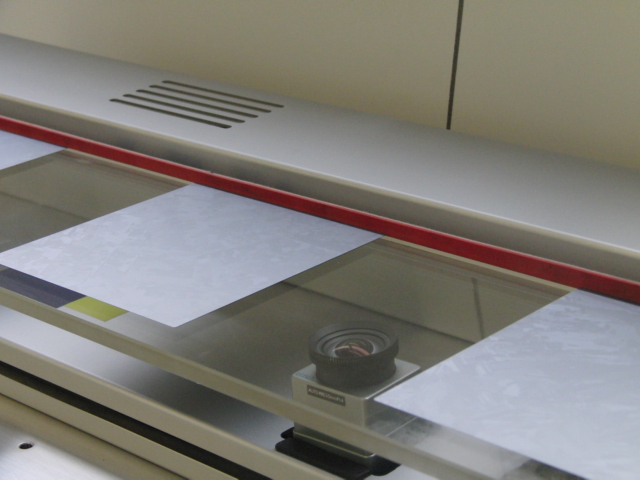 After inspection, the wafers are picked up without contact by the LinearOverhead-Transport module using simultaneously underpressure and ultrasound and are then transported further from above. Defective wafers are ejected here. The wafer floats below the surface of the linear unit and can also be moved and accelerated without friction. The wafers are centered via pins that are attached to belts. 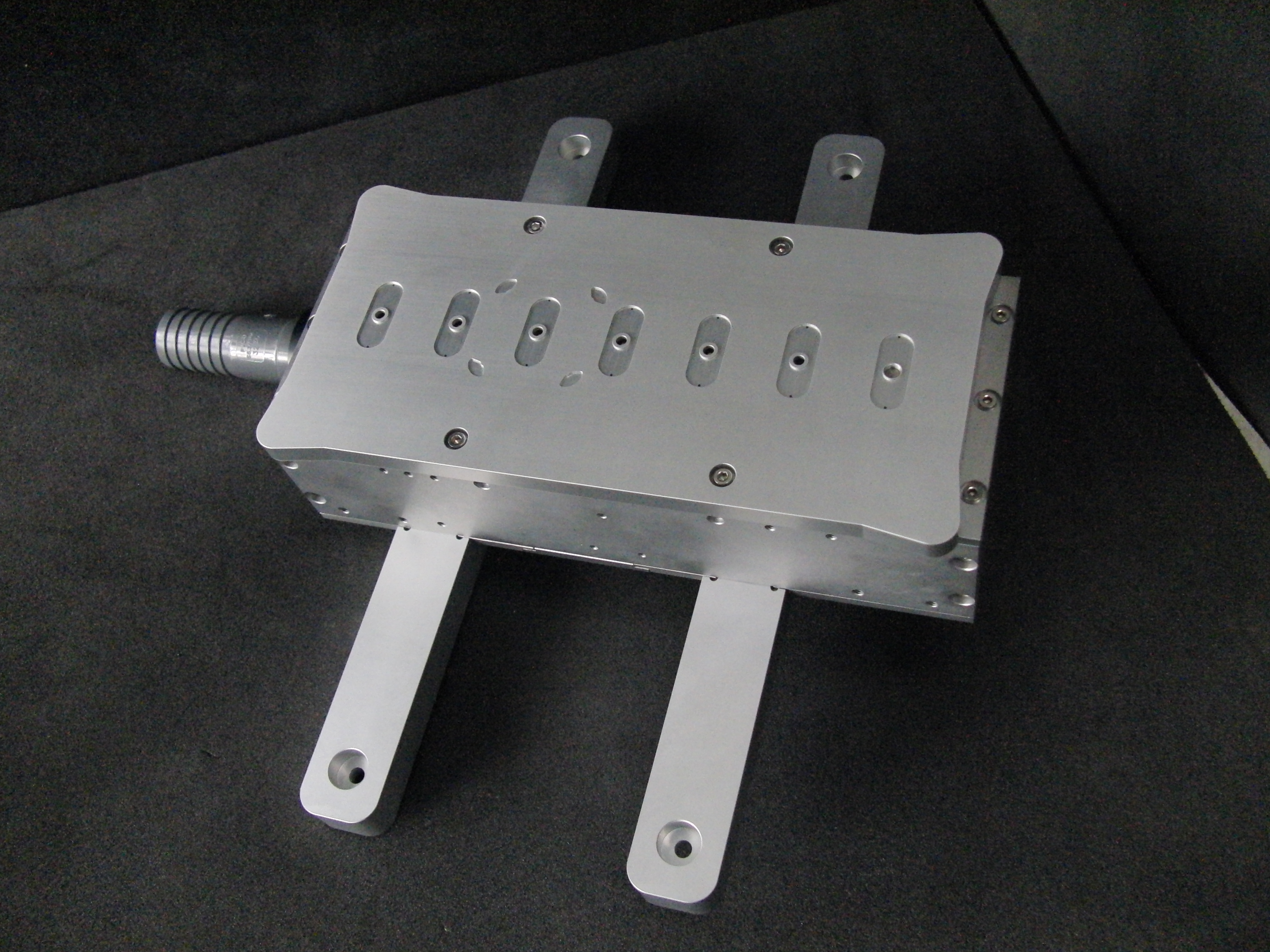 In order to subsequently place the wafers on the matrix trays, which are also moving, the underpressure is switched off at the correct position, causing the wafers to be gently unloaded at the appropriate location. 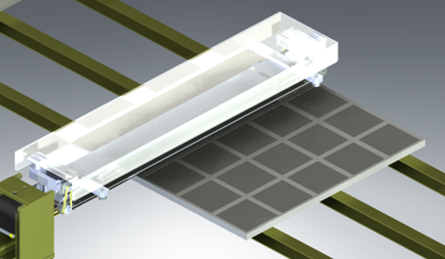 The entire process flow is fully automated. The Modular Waferhandling-System enables all processes that are found in the handling of wafers. Loading and unloading, conveying, separating, gripping, inspecting and sorting can be realized in one system and at high speeds.

Using ultrasonic technology, the wafer is kept at a distance on both sides throughout the modular system so that no micro-scratches or contamination can occur. Thanks to the careful handling, the customer's breakage rate could also be significantly reduced. This also reduced the downtimes associated with rejects and optimized the process flow.